Home » Photography Tips » Drobo FS | Our Photography Backup Solution
Few things cause more sleepless nights for a photographer than the possibility of losing precious photos due to the failure of a hard drive. The reason it is the source for consternation is simple: hard drives are widely known as one of the most unreliable parts of the computer. Due to their moving parts and the strenuous demands place upon them failure is not a matter of if, but when. Fortunately there are a lot of ways photographers can reliably back up their data.
The unassuming device you see below is our newest solution to the problem described above. It is called the Drobo. The Drobo is a file server that connects to our main computer through the network router. Within the Drobo we have (4) 2 terabyte hard drives. The file server utilizes a technology known as RAID (redundant array of independent drives). Normal computer hard drives store data independently from other drives, but in a raid configuration the hard drives work together. What this means is if one of the hard drives in our Drobo fails we can replace the bad drive with a new one and the RAID will be rebuilt using the data from the good, existing drives. In this scenario no photos would be lost forever because of a single drive failure.
In addition to storing our photo jobs on the Drobo we also keep a copy of every photo shoot on our computer. This level of redundancy should be of comfort to our clients – current, past and future.
Frankly the only thing that’s not great about the Drobo is the transfer speeds, which are a bit slow. The Drobo took maybe a half hour to set up and required little working knowledge of networks to do so. What we were looking for was a reliable, convenient, and simple way to redundantly store our photos, and in the Drobo, we’ve found that.
The Drobo FS retails on Newegg.com for $499. The drives (2 TB Western Digital Green Caviar drives) retail for around $129 each. 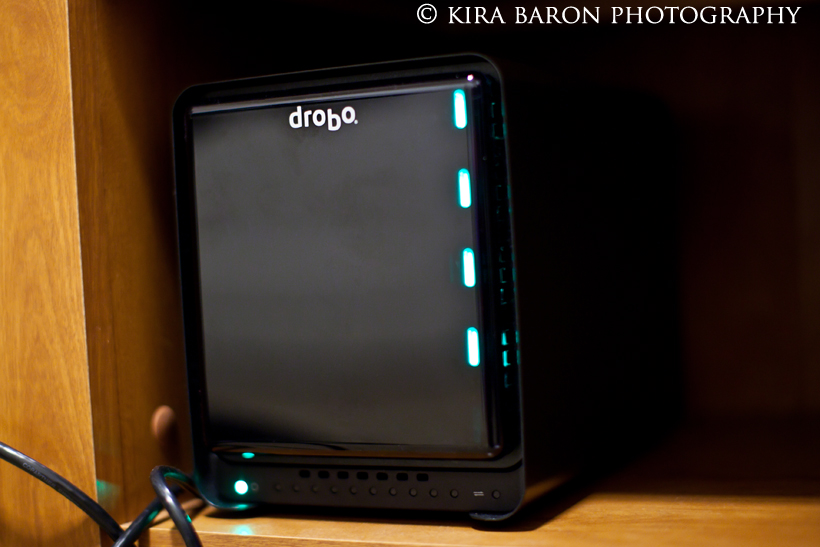 One thought on “Drobo FS | Our Photography Backup Solution”

Get To Know Us